The pioneer of cryophysics. A man who suffered for his homeland and died for science

Zygmunt Florenty Wróblewski (1845-1888) – a Polish physicist and chemist; fighter for Poland’s independence in an 1863 anti-Russian uprising

In the second part of the 19th century, the subject of gas liquefaction had established its place in history. In 1790 carbon dioxide had been liquefied; ammonia and many other gases quickly followed. In two series of experiments, conducted in 1823 and 1845, Michael Faraday liquefied all of the known gases except for oxygen, nitrogen, hydrogen, nitric oxide, carbon monoxide and methane. Since that time, many ineffective tests were done in an attempt to liquefy these so called ‘permanent gases’. In 1877, Louis Cailletet (in Paris) and Raoul Pictet (in Geneva), independently of each other, liquefied oxygen and nitrogen in dynamic state, i.e. they brought them to the form of a fog that they could observe for a very short period of time. But no one managed to liquefy these two main components of the air in a static state until a duet of two Polish scientists, one of whom was named Zygmunt Wróblewski, arrived on the scene.

Zygmunt Wróblewski was born on the 28th of October 1845 in Grodno. After finishing the intermediate school with excellent results, he began his mathematical and physical studies at the University of Kiev.

The outburst of the anti Russian uprising in 1863 engaged a young Wróblewski in a swirl of conspiratorial actions, which caused his arrest by the end of June; he spent sixteen months in remand, waiting for the trial. Only his young age saved him from the death penalty, but unfortunately was that not enough to rescue him from the exile to Siberia...

At first, he stayed in Tomsk, at the West Siberian Plain. He coached students to earn his living and gained knowledge about science through the popular literature by Russian authors. Thanks to his family’s efforts, in 1867 he was re-settled in the European part of Ural, where the climate was much milder, but on the other hand the total intellectual vacuum made his exile more and more difficult.

After six years of wandering, owing to an amnesty for the Polish insurgents, Wróblewski regained his freedom and returned to Warsaw. Universities of the Russian Empire were closed to him, but he acquired knowledge of mathematics and physics and studied foreign languages on his own. Imprisonment and deportation undermined his health an ever worsening eye illness threatened him with blindness. Fortunately, eye operations were performed in a clinic in Berlin by a famous ophthalmologist – Professor Gräff – who saved him from the loss of eyesight.

After a short recovery period, Wróblewski started studies at the University of Berlin. He wrote letters to many professors at various academies and proposed himself as assistant. The only one who responded was Johann P.G. von Jolly who is most famous for the advice he gave to Max Planck against studying physics as, ‘it this field everything important has already been discovered and what remains is filling some irrelevant gaps’. Therefore, in 1872, at the University of Munich Wróblewski became an assistant to Professor Jolly, who facilitated his access to a well-equipped laboratory; there he conducted a series of experiments and wrote a dissertation entitled ‘The Investigation of the Induction of Electric Energy by Mechanical Means’; this paper led to his graduating in just two years and with the greatest praise he was given the PhD. 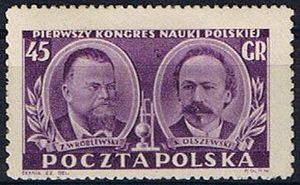 Z. Wróblewski and K. Olszewski on the stamp

Neither life in exile, nor ill health, nor even difficult financial situation disturbed him much while pursuing the intended objective. On the contrary, they toughened him up and taught him to fight against adversity. His talent and ambition were finally noticed and appreciated and he was offered a post as an assistant in a modern laboratory at newly-established German University of Strasburg where he used to give lectures concerning mechanics and the physics of liquids and gases. All that time he became interested in problems with gas diffusion, designed his own apparatus and began research that resulted in his postdoctoral dissertation.

Throughout his studies in Germany, Wróblewski’s thoughts were centred on the desire to return to his homeland. But before it happened, a student grant enabled him to visit some of the most advanced laboratories in the world and meet some of the leading scientific figures in Paris, Oxford, Cambridge and London, among others. Later he worked at the renowned Ecole Normale Superiéure in Paris, where he performed experiments on the absorption of gases under high pressure. During his stay in Paris Wróblewski designed and commissioned the apparatus that was able to conduct experiments under the pressure of 70 atmospheres.

In 1882, having spent thirteen years on emigration, thirty-seven-year-old Wróblewski settled down in Cracow and became a professor of the Faculty of Physics at the Jagiellonian University. He was a respected and well regarded lecturer. He installed a modern chemical laboratory with the latest electrical appliances there. It was one of the first electrical installations in Cracow. In January 1883, Karol Olszewski, a professor of the department of the analytical chemistry, offered to him a scientific partnership with a purpose of oxygen and nitrogen liquefaction in the static state.

Not only did the duo manage to liquefy oxygen and nitrogen, but also to solidify methanol and carbon dioxide. In the world of science, the achievements of Polish scientists were greatly appreciated. Some of the best contemporaneous scholars congratulated them on their investigations. Their feat was described in the Warsaw and Cracovian press and foreign science journals; the liquefaction of some of the ‘permanent gases’ had a colossal impact on the validity of the kinetic theory of gases.

Unfortunately, soon afterwards the partnership of Olszewski and Wróblewski fell apart, allegedly because of the rivalry issues, and the two scientists decided to work individually. Wróblewski still worked on the physics of low temperatures; he constructed and improved the installation for liquefaction; also, the Polish academic worked on hydrogen’s compressibility and determined and published its critical parameters. Later, Olszewski reluctantly admitted that Wróblewski’s findings subscribed to what he had measured before. In 1885, Wróblewski investigated the properties of many more substances in low temperatures.

Wróblewski was considered a man of few words, interested only in science; he was particularly silent on the subject of his exile. Wróblewski’s contemporaries put down this reluctance to communicate, together with his moods and secretive nature, to his suffering – both physical and mental – during deportation.

Zygmunt Wróblewski’s grave at the Rakowicki Cementary in Cracow

At the end of 1887 Wróblewski started preparing the publication on the hydrogen and all of its known properties. Sadly, he did not succeed in completing it as, on the 25th of March 1888, an unfortunate accident occurred at the laboratory. The oil from the upset paraffin lamp spilled on his clothes and took fire. Realising what was happening, Wróblewski run out to the university yard, where two students helped him quell the flames on his body with coats. Unfortunately, the burns he suffered were so serious that he died on the 16th of April 1888, five years after the memorable experiments that nearly brought a Nobel prize to him and his partner, Karol Olszewski. The funeral took place at the Rakowicki Cementary in Cracow.

On the plaque of his grave the inscription reads, ‘He Suffered for his Homeland and Died for Science’; the premature death of the great scientist was a huge loss to Polish science. The loss was felt strongly by the students, for whom the funeral was a great manifestation of admiration and sympathy to the popular lecturer.

In 1976, by the decision of the International Astronomical Union, a crater on the Moon was named after Wróblewski. Now, nearly 130 years since his tragic death, students from the IX High School in Cracow which bears the name of this talented scientist, continue to take care of his grave. Meanwhile the need for liquefied gases still increases; they are commonly used in chemical, metallurgical, electronical, pharmaceutical and food industry. Without the cryogenic liquids, astronautics, astronomy and many other fields of science would not be able to reach the present stage of development.