The face of Royal Air Force 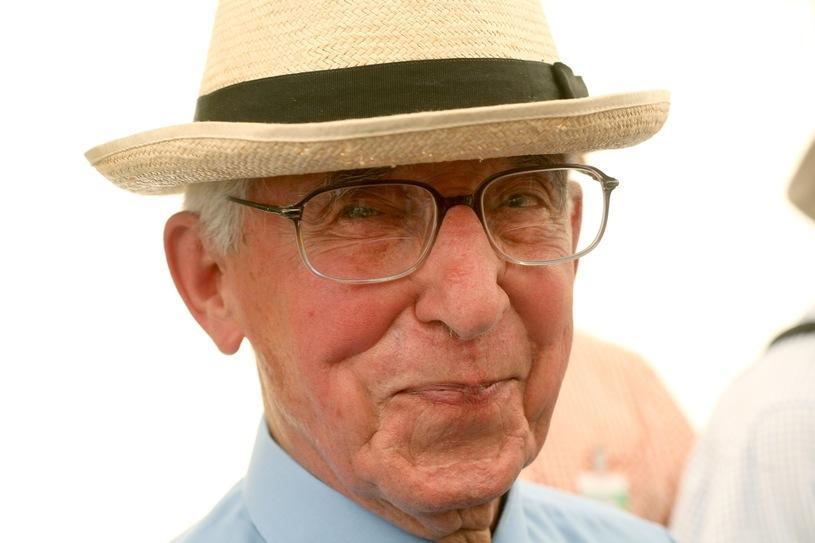 Franciszek Kornicki (whose family name was actually “Pluskwa”) was born in Wereszyn, a half Ukrainian half Polish village, strongly shaped by the Jewish community, in Lublin Voivodship. Future Spitfire Pilot, the youngest son and a brother of six, grew up in a two room cottage with a rough-and-ready garden. After bucolic years in Wereszyn, Franciszek  was sent to a secondary school in Hrubieszów, where he lived at janitor’s place. It was the last term of his seventh form when he  participated in a paramilitary summer gliding camp. Franciszek was confronted there with the military reality for the first time. By then he had been described by his instructor – a warrant officer, as “Choleric” - someone who would never successfully complete a military course. As expected, the “Choleric” was the first one to master the spectacular manoeuvres… By gradually increasing hours of training, he obtained the international pilots ‘C’ category - the glider badge. After passing high school final exams, time was running out and decisions about his future had to be made. For personal and financial reasons Franciszek had to abandon his university dreams, where he aspired to study Polish language. Eventually he applied for admission to the Polish Air Force in Dęblin. His enjoyment of the military gliding course showed him that his future lays in the Air Force. Experiencing Air Force realities was, as mentioned in his book, “a new feeling of adventure and romance”. His final terms in Dęblin’s College happened to be during the 1938, when everybody was aware of the growing power of Germany on European arena and Hitler’s territorial expansion. It was also the year in which he assumed the name Kornicki. Franciszek’s superior officer pointed out that his last name – Pluskwa (the bedbug) - could possibly cause some misunderstandings in his future unit. Thus encouraged, Franciszek started looking for a brand new, suitable surname for a pilot. Finally he chose his new surname after one of Polish villages – Kornice. Its pronunciation was acceptable, he didn’t know any other ‘Kornicki’ and so the new name was born. 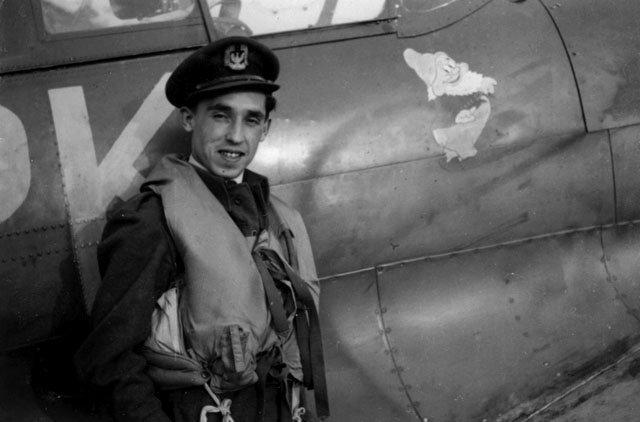 Kornicki with a draft of emblem on
one of 315 Spitfires

The events leading to the war in 1939 followed one another rapidly. On 1st March, Great Britain and France announced their guarantee of territorial integrity of Poland, and that they would stand for the assistance of Poland in case of German aggression. On 28th April Hitler renounced the ten year Non-aggression Pact with Poland. On 23rd August the Soviets and Germans signed the agreement of the partition of Poland between those two powers. On 1st September Hitler invaded Poland and on 17th September Stalin’s troops attacked Polish territory without any declaration of war. At that time Kornicki was in his final year of Dęblin College, and cared far more about getting to the operational aircrafts than passing theoretical exams. At the end of the last year in College, Kornicki learned how to use gunnery, practising to fire from the air to the ground and air to air targets.

After completing his training Franciszek was posted to Third Fighter Wing of the Sixth Air Force Regiment in Lwów. Before reporting for duty he was given a fourteen days’ leave. He utterly devoted himself to family time. After one week at home he got a telegram saying: “Report to your unit immediately”. As it turned out those 7 days were the last occasion on which Kornicki saw his father and a long time before he saw his mother and brothers again. Franciszek was assigned to The Polish Łódź Army and when Germans attacked the defence line held by this unit on 1st September 1939, Kornicki officially entered the war. On September 17 the same year, all pilots from Franciszek’s unit were informed that the Red Army had crossed the Polish border and was moving westward. The pilots had to fly to Romania and do everything to make their way straight to France. His membership in Air Force guaranteed him maritime transport to France. The Polish-French-British Agreement of October 1939 provided the Poles with transfer of aircrew to Great Britain to serve in RAF Volunteer Reserve or safe stay in France in exchange for serving under French command. It meant that the French Air Ministry had a complete control over Army Co-operation Squadron and Fighter Squadron - to which Kornicki belonged. On August 5th 1940 the new Polish-British agreement was signed whereby Polish Air Forces were subordinated in every respect to Royal Air Forces. Kornicki’s first contribution in The Battle of Britain was on 18th September (1940) in 307 Night Fighter Squadron.  After a period of service, he was sent to 303 and 315 Squadron. After Kornicki’s second mission in the French sky, he was made a Commanding Officer. Although the honour came as a great surprise, he utterly appreciated the advancement.      In 1943 Kornicki flew for last time in Squadron 315 and took over the command of 308 Squadron, again to his astonishment. Unfortunately he went down with appendicitis and had to quit the position for an 8 week convalescent leave. After a swift recovery he became an officer of 317 Polish Squadron, which he led until December 1943. At the age of 26, he was the youngest Commander in the Polish Air Force. Franciszek was also the only Squadron commander with the Polish rank of Lieutenant, all the others held at least the rank of Captain. In January 1944, after serving for over three years as a fighter pilot, Kornicki was transferred to a ground job in a liaison department. 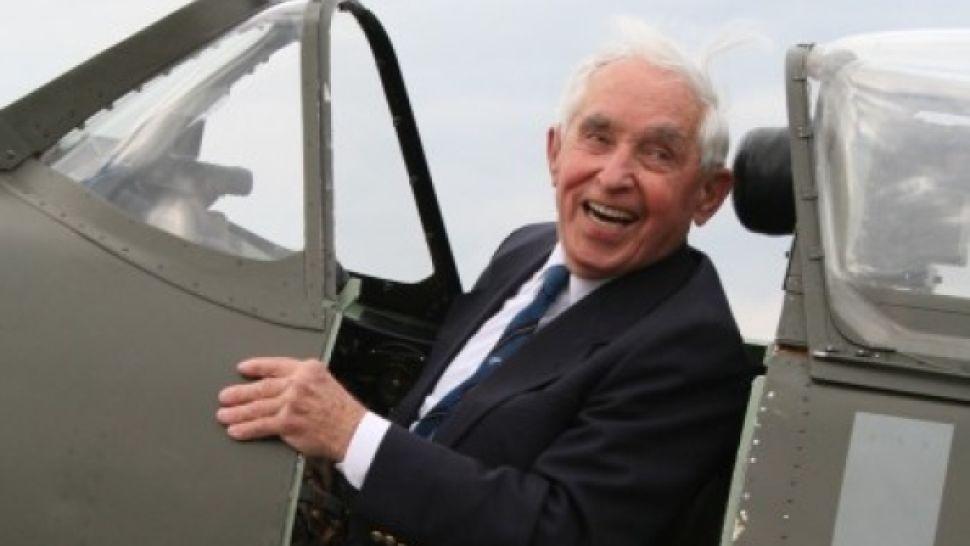 Kornicki reunited with Spitfire
which he had flown in 315 Squadron in 1942,
photo taken on August 2004

During his service as a liaison officer he had attended a course in the Polish Air Force Staff College in Weston-Super-Mare subsequently serving the Royal Air Force as staff position in Belgium and the Netherlands. Kornicki was awarded the Virtuti Militari Order and three times the Polish Cross of Valour for his war activity. The Yalta Agreement came as a shock to Kornicki and most of his fellow-countrymen. There was no question at all about returning to Poland. Going back to Soviet-occupied Poland presented a danger of imprisonment or execution, therefore he decided to stay in The UK as a refugee. In 1948 he married Patience Ceridwen Williams with whom he has two sons Peter and Richard. In 1949, along with his wife, Kornicki became the owner of a guest house located in Wargrave-on-Thames in Oxfordshire. In 1951 he responded to RAF appeal for pilots demanded in Cold War warfare. As a Flight Lieutenant in RAF he was commissioned and the following year he returned to RAF and subsequently served it in its foreign bases in Malta, Cyprus and Aden. After retiring from RAF in 1972 Kornicki worked in the Ministry of Defence. Preparing for its 100th anniversary, Royal Air Force decided to invite a public vote for the “Face” of the ceremony. Kornicki won it, significantly leading in polls with a number of 325,000 votes. 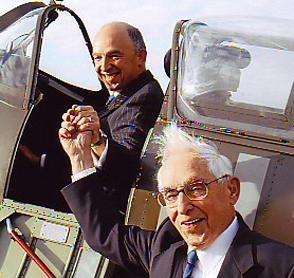