A photography from second half of the 19th century

Ernest  Malinowski is primarily  known as a genius engineer and a designer of the Central Transandino, which is a railway that links  Peru’s capital, Lima; the Pacific port of Callao and the part of Peru situated in the Andes. With time, Malinowski also became Callao’s hero, having participated in the Chincha Islands War between Spain, Chile and Peru (1864-1866).

He was born in a rich Polish noble family on 5th January 1818. His father, Jakub, served as an officer in the Duchy of Warsaw military. Between 1827 and 1831 young Malinowski attended high school in Krzemieniec. When  Ernest was just 13 he fought during the November Uprising, which forced his family to escape from Poland in 1831. Having been separated from his mother during the journey, he, his father and one of Ernest’s brothers found themselves in Paris in 1832.

Malinowski continued his education in the  Lycée Louis-le-Grand  and after graduation he took up studies at a famous engineering  school in Paris called École Nationale des Ponts et Chaussées, which  he finished in 1838. Since then he has worked as a government engineer, designing roads and bridges in France and Algieria. In September 1852 he signed a 6-year contract with the French government to work in Peru as a governmental engineer. After landing in Lima Malinowski took part in establishing a new Peruvian engineering organization  - Comisión Central de Ingenieros Civiles as well as the first Peruvian engineering school  - Escuela Central de Ingenieros Civiles, which he soon abandoned due to struggles with the school financing. He also played a major part in organizing a project of the development  of Casa de Moneda (Peruvian mint). 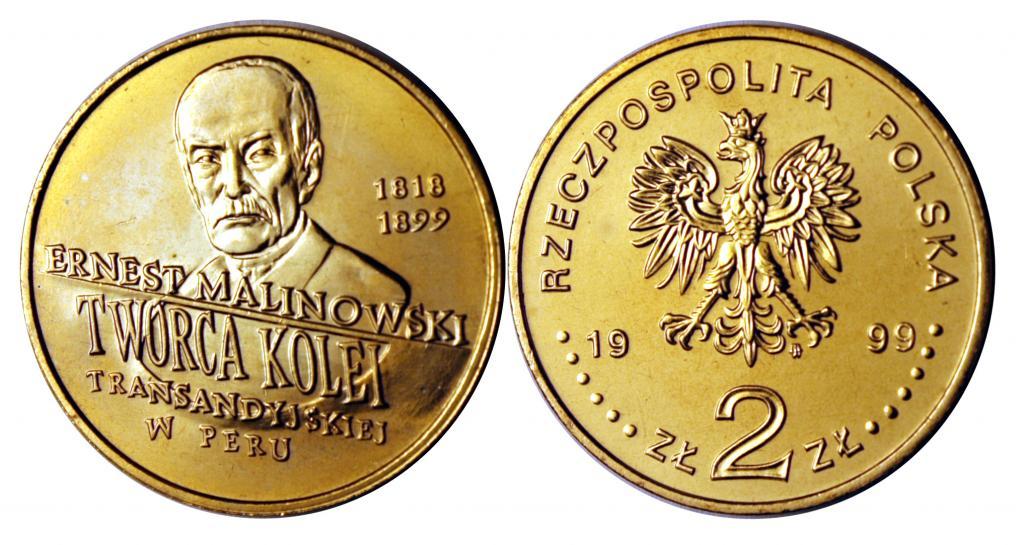 A coin issued in 1999 by Polish National Bank

During the Chincha Islands War in 1866, the Peruvian  government appointed Malinowski the main engineer in the port of Callao, near Lima. Malinowski developed Callao’s fortifications and defence system by putting Peruvian cannons on train wagons, which moved around battlefield quickly and effectively  cannonaded Spanish ships. Callao managed to withstand the enemy and due to Malinowski’s great commitment to victory he received honourable Peruvian citizenship and became a national hero. 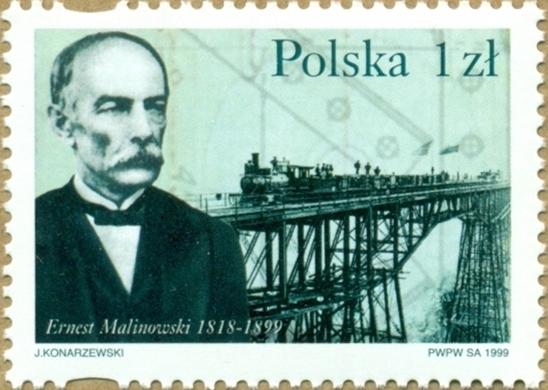 In 1869 Peruvian government commissioned Henry Meiggs’s company to construct the  Central Transandino railway and Malinowski was employed as the main architect on  the project. His plan stimulated the building of a railway connecting Lima with mineral-rich region s Cerro de Pasco and Jauja Valley. Construction began on January 1st 1870 in Lima. The following four years the Pole oversaw the creation of 141km of railroads as well as the building  of 30 bridges and the of 60  tunnels allowing to cross the mountains. Until 2005 the railway line built by Malinowski, which was situated 4817 meters above sea level, had been the highest one in the world. Due to the outbreak of war between Peru and Chile (1879-1881) Malinowski decided to move to neighbouring Ecuador where he got involved in the building of another railway line, between Guayaquil and Quito – Ecuador’s capital.

Ernest Malinowski came back to Peru in 1886, to work in the train industry once more. In addition he wrote a few articles for the “Boletin de Minas” magazine and served as an academic until his death in 1899.